The Good Grammar Bandit Leads the Way in Legibility 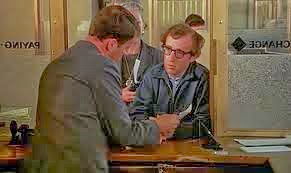 Unlike Virgil Starkwell -- Woody Allen's character in "Take the Money and Run," whose bank robbery was ruined because the teller thought his note said he had a "gub" rather than a gun -- a bank robber in Colorado has earned the nickname "The Good Grammar Bandit" because of his meticulously typed and constructed robbery notes. Read about him here.
1 comment: