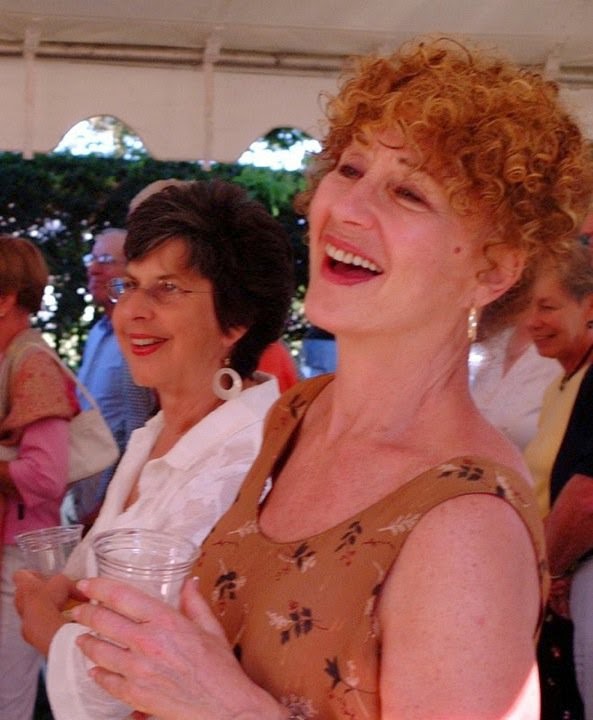 As we look toward our "Celebration of Linda" this weekend in Bridgeport, and the words we will use to remember her great spirit and humor, we've talked a lot about the eulogies she crafted for others.

The one below, for her father-in-law, was among her most beautiful and well crafted.

Bayard and I shared a love of sweets. Both of us had to
give them up. Occasionally he would indulge. And when he did
there was a look of such pleasure on his face it made you happy
just looking at him.
Halfway through a big dinner he would ask
whoever was in charge, “Are there pies in the oven?” And when
you presented him with a warm piece of blueberry pie a la mode
you always received the most wonderful smile in return.
His expression was one of pure sweetness. He had that same
expression on his face whenever he looked at his wife, his
children and his grandchildren.
Sweet seems too simple a word to describe such a very
complicated man. But that’s how I like to remember him. That
and his heart, which was big and kind and rich and deep as the
fudge brownies he could never quite get enough of.
If there is a heaven I know he is there, and I take great
comfort in the fact that he is able to eat anything he wants. No
more sugar free, salt free, alcohol free.
I like to think of him, in fact, at the bakery counter, in the sweet bye and bye having earned his just desserts, so that for him, the pies will always be in the oven and forever warm and sweet. Just like him.
No comments:

Linda's toast about Charlotte's introductions on the Titanic 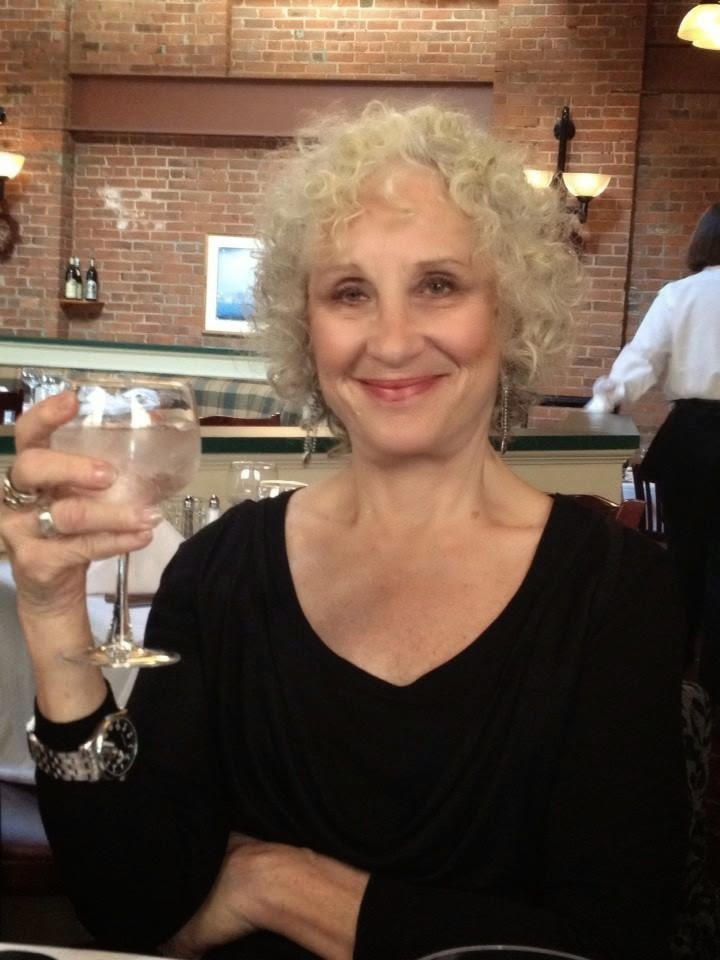 In yesterday's tribute to the late Linda Urbach, I referred to her deliciously crafted toasts.  The one below, delivered on my mother's 80th birthday, was one of her best.
My brother-in-law Tom Lord read it recently and remarked that it was as funny now as in 1997; in fact, remarkably so.  Read it and see for yourself.  :-)

I first met Charlotte Clark aboard the Titanic. I was
holding on the rail for dear life when Charlotte came up to
me, introduced herself and said, “I’d like you to meet
someone. Linda, this is Mrs. Astor. Mrs. Astor, this is Linda.”
Mrs. Astor was white as a sheet. “We’re sinking, we’re
sinking!” She shrieked.
“Mrs. Astor lives in New York,” Charlotte explained to me.
“Linda lives in New York, too,” she informed Mrs. Astor.
“Oh, my God,” moaned Mrs. Astor, and she slipped away
into the sea.
“Mrs. Clark,” I said. “Call me Charlotte,” she corrected.
“Charlotte, I think we’re going down.”
“Not before you meet the Captain,” she insisted. “Oh Captain, my Captain,” she
beckoned charmingly, “I want you to meet my new friend
Linda from New York. Linda, this is our Captain.”
Well, it went on that way as people slipped past us into the ocean,
stopping only momentarily so that Charlotte could make her
introductions.
We all have our little idiosyncrasies. Lady Macbeth had
her spots. Jack Kerouac had his road. Charlotte has her
introductions.
To paraphrase Will Rogers, she never liked a
man she hasn’t met. She isn’t happy until everyone she
knows meets everyone else she knows. Not just meets, but
memorizes the exact moment of their meeting, the names
and ages of all their children and, most importantly, their
accumulated grade point averages.
I talked to her son Stocky about this. He told me once he tried to limit her to five
introductions during one particular party. Well, you can just
imagine the results. She ended up by introducing him to over
250 people that night including the mayor of Boston, the
Secretary General of the U.N. and the novelist John Updike.
And they weren’t even at that party.
In my family they were terrified of ever introducing me to
anyone. I was sullen, rude and prone to violent outbursts
when confronted with an unfamiliar face. But that didn’t stop
Charlotte. I was fresh meat to her – a veritable blank sheet,
an Unintroduced Person. Since first coming to the Cape with
her son Tucker on Memorial Day, 1975, I have met a total of
34,987 people. After introducing me to the entire town of
Harwich Port, she took me out by Exit 10 off Route 6 and
introduced me to 78 passing vehicles before the State
Troopers came. And then she introduced me to them as well.
“Officer Borden, Officer Mahoney, I’d like you to meet my
daughter-in-law Linda. There’s no doubt in my mind that
Charlotte Cushwa Clark will be around for many years to
come to introduce the few million people that still haven’t met


each other yet, “Uma…Oona…Oona…Oprah…Oprah….Uma…”
3 comments:

Here is a tribute to my beloved sister-in-law Linda:

Linda Urbach; ad copywriter, novelist, humorist, playwright and screenwriter; after a long bout with cancer; on July 14, 2014, in New Haven, Conn.
Linda Spring Urbach was born December 6, 1940, to Charles "Duke" and Pearle Spring Urbach in Los Angeles, Calif. She grew up in Denver, Colo., and Chicago, Ill.
After graduating from the University of Colorado in 1962, Linda taught English for a year at the Berlitz school in Paris, then moved to New York City and began a successful career as an advertising copywriter, very much in the world depicted in Mad Men. She wrote the classic line, "My girdle is killing me," for Playtex at Young & Rubicam, for which she won a Clio Award.
Linda’s marriage to Howard T. Howard, former first horn for the New York Metropolitan Opera Orchestra, ended in divorce.
Linda met her second husband, Tucker Clark, on Labor Day weekend 1975 at a 50s night at the Sand Bar in Westhampton, N.Y., where they danced all night.
Her memorable introduction to Tucker’s family came over Memorial Day weekend 1976 in Harwich Port, Mass., when she scraped, sanded and varnished the wood on a Boston Whaler and met many of Tucker’s five siblings, each one bearing a Waspier name than the next (Kathy, Stocky, Rocky, F.T. and Brooksie). As she recounted in a storytelling workshop, Linda found the Cheever-esque whirlwind of the Clark family irresistible. The feeling was mutual.
Linda and Tucker were married on June 28, 1980, on the beach in Harwich Port by her father-in-law, the Rev. Bayard S. Clark, and she became an essential, beloved and treasured member of the large extended family. Among Linda’s many contributions to the life and spirit of the Clark family were her toasts and eulogies. Skillfully deploying her loving, razor-sharp wit, she enhanced family occasions with words of humor, eloquence and affection.
In 1980 Linda, under the nom de plume Linda U. Howard, published her first novel, Expecting Miracles, a humorous look at the oft-heartbreaking pursuit of motherhood. It was optioned for a movie (never made) by producer Burt Sugarman on behalf of the actress Jill Clayburgh, and Linda followed up two years later with The Money Honey, inspired by the option money's hilarious effects on her household.
The miracle Linda was expecting, Charlotte Spring Clark, was born on August 16, 1983. “The joy of Charlotte continues to this day,” she said. “She is what I am proudest of in life.” Charlotte is one of 13 first cousins who, along with their spouses and children, consider themselves as close as siblings and completely devoted to their Auntie Linda. That feeling, too, was mutual.
In 1991, Linda and Tucker moved to Westport, Conn.
Her one-act play Scenes from a Cell was a finalist in the 2002 New England One Act Festival. Her play MoMoirs -The Umbilical Cord Stops Here!, reminiscences of her daughter, premiered at the Zipper Theater in New York and has been performed by members of the Theatre Artists Workshop and extensively throughout New York and Connecticut.
She created and facilitated the website MoMoirs, Writing Workshops For & About Moms, which resulted in the anthology, MoMoirs: I'll give you something to cry about, self-published in 2013.  Even though she was already very ill, Linda joined the three other authors in several celebratory readings around Connecticut, in the weeks before Mother's Day, 2014.


Linda also used her skills to lead a twice-monthly writing class at the Trumbull Library for many years, where she inspired and nurtured several aspiring writers to love the craft as well as her unique spirit.
Linda co-wrote, with her longtime friend Roberto Mitrotti, the screenplay for Stealing Chanel, which is scheduled for release in 2015. Their screenplay for The Secret Diary of Sigmund Freud was produced by 20th Century Fox Specialized Film Division and starred Bud Cort, Carole Kane, Klaus Kinski and Marisa Berenson.
In 2011, as Linda Howard Urbach, Linda published Madame Bovary's Daughter, her novelistic answer to the question, whatever happened to the only daughter of the scandalous Madame Bovary, literature’s greatest adulteress and worst mother?
Linda also has a personal Blog, and her writings have been featured in The Huffington Post.
She was preceded in death by her parents and her brother, Jerry Urbach. Linda is survived by her daughter, Charlotte Spring Clark, of Myrtle Beach, S.C., and Charlotte’s beloved cousins and cousins-in-law; her ex-husband W. Tucker Clark of Westport, Conn., and their siblings Tom and Katharine Lord of Houston, Texas; Judy and Bayard Stockton (Stocky) Clark Jr. of Hamden, Conn.; George Rockwood (Rocky) Clark and Mary Larkin of Harwich, Mass.; Franklin T. (F.T.) Clark and Janet Dinsmore of Washington, D.C.; and Brooks and Karen Clark of Knoxville, Tenn.; and her many cherished friends and readers.