FRANK CUSHWA: A LEGACY OF PASSIONATE TEACHING AT 100

By Brooks Clark
From the Exeter Bulletin, Summer 2007

Beloved by his colleagues and students (including writers like James Agee, Robert Benchley and Robert Nathan), Frank Cushwa was “a skillful and sympathetic teacher who made a difficult subject living and thrilling.” He was also a puzzle.

One hundred years ago, Frank William Cushwa joined the Exeter faculty as an instructor in the
English department.
At such a milestone, it’s fitting to assess Cushwa’s influence on the Academy over his 32-year
tenure. “From the moment he joined the faculty,” wrote Myron R.Williams in The Story of Phillips
Exeter, “he began arousing interests that had grown sluggish and set in motion new ones. Under
him the English Department truly came of age, and he gave new life to the Bulletin, which he 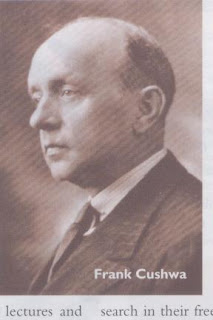