Today he is 70. By any measure, Tucker (my oldest brother) has been and continues to be an enduring touchstone of 60s culture.For just a literary taste, we will take GTOTD readers back in time, to the University of North Carolina in 1963.Tucker arrived as a freshman, having spent the summer building roads in Gambia with a program called Crossroads Africa.He took part in a protest to integrate the lunch counters in downtown Chapel Hill. Since Main Street in Chapel Hill was also a federal highway, Tucker recalls, “on TV there were shots of the Feds hauling us away on charges of obstruction of a federal highway."When he was a junior, he lived in a house off campus. His mother, Charlotte, recalls visiting him there. “It was the first time I saw MAKE LOVE NOT WAR. It was on a car in front of the house."At one point, one of Tucker’s friends was on the road when he was picked up hitchhiking by … well, let’s let Tucker tell it:My buddy, Marshall Hay – who is still at the Meher Baba Ashram in Myrtle Beach, S.C. – was hitch-hiking back to Chapel Hill after his first one-month stay down there, giving up the psychedelic life for Baba, when the first car that picked him up was a bunch of Lowell, Massachusetts, Indians and a drunk and bloated ---dah-dum --
Jack Kerouac!!! He was coming from his mommy’s house in South Carolina. Marshall convinced the crew to come get drunk in Chapel Hill and sequestered them in the Tempo Room and went and got me, Russell Banks, and all the other UNC literati, who proceeded to Russell's house, where Kerouac berated hippies, the screwed-up California scene and how sick of everything he was. He consumed lots of cheap-by-choice wine and told Russ and other erstwhile writers that they all sucked. Later on in New York Russell Banks wanted us to reconstruct each of our vantage points of that weekend for a Vanity Fair article-- never happened. It was so seminal -- and a part of Chapel Hill lore. From Chapel Hill, Tucker went on to the Peace Corps in Nepal, a commune in Maine, an ahead-of-its time drug-education firm in Cambridge, Mass., a couple of decades as an alcoholic treatment counselor in Harlem, and now as a man-about-town in Westport, Conn.HAPPY BIRTHDAY, TUCKER!

At right, Tucker with his daughter, Charlotte Spring Clark.
No comments: 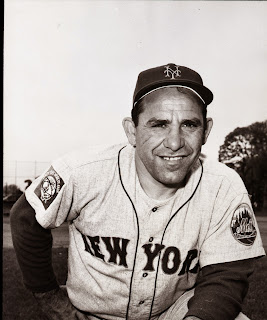 Yogi Berra turns 90 today, proving the wisdom once again of his words, "It ain't over 'till it's over."

Note also that the GTOTD staff was sitting in a glass-walled office on the 20th floor of the Time & Life Building next to one in which Roy was typing this story on a Royal typewriter, ripping out the pages, crumpling them up and throwing them into a pile in the corner.

Though the story, cited recently as one of the 60 best ever run in the pages of SI, reads as if every word, phrase and sentence poured out with ease and fully formed, know that great humor is harder than it looks.  :-)

That same year, the GTOTD staff asked the great question of whether Yogi Bear was based on this rotund baseball great.  For the answer, click here.
Here is a fairly complete list of sayings attributed to Yogi Berra. (Although, as Yogi himself once said, "I didn't really say everything I said.")

"This is like deja vu all over again."
"Half this game is 90% mental."
"If I didn't wake up, I'd still be sleeping."
"Slump ? I ain't in no slump. I just ain't hittin'."
"Baseball is 90% mental, the other half is physical."
"You can observe a lot just by watching."
"He must have made that before he died." -- Referring to a Steve McQueen movie.
"I want to thank you for making this day necessary." -- On Yogi Berra Appreciation Day in St. Louis in 1947.
"I'd find the fellow who lost it, and, if he was poor, I'd return it." -- When asked what he would do if he found a million dollars.
"Think! How the hell are you gonna think and hit at the same time?"
"It's hard to make predictions, especially about the future."
"You've got to be very careful if you don't know where you're going, because you might not get there."
"I knew I was going to take the wrong train, so I left early."
"If you don't know where you are going, you will wind up somewhere else."
"If you can't imitate him, don't copy him."
"You better cut the pizza in four pieces because I'm not hungry enough to eat six."
"It was impossible to get a conversation going; everybody was talking too much."
"A nickel isn't worth a dime today."
"Nobody goes there anymore; it's too crowded."
"It gets late early out there." -- Referring to the bad sun conditions in left field at the stadium.
"Glen Cove." -- Referring to Glenn Close on a movie review television show.
Once, Yogi's wife Carmen asked, "Yogi, you are from St. Louis, we live in New Jersey, and you played ball in New York. If you go before I do, where would you like me to have you buried?" Yogi replied, "Surprise me."
"Do you mean now?" -- When asked for the time.
"I take a two hour nap, from one o'clock to four."
"If you come to a fork in the road, take it."
"You give 100 percent in the first half of the game, and if that isn't enough in the second half you give what's left."
"90% of the putts that are short don't go in."
"I made a wrong mistake."
"Texas has a lot of electrical votes." -- During an election campaign, after George Bush stated that Texas was important to the election.
"Thanks, you don't look so hot yourself." -- After being told he looked cool.
"I always thought that record would stand until it was broken."
"Yeah, but we're making great time!" -- In reply to "Hey Yogi, I think we're lost."
"If the fans don't come out to the ball park, you can't stop them."
"Why buy good luggage? You only use it when you travel."
"It's never happened in the World Series competition, and it still hasn't."
"How long have you known me, Jack? And you still don't know how to spell my name." -- Upon
receiving a check from Jack Buck made out to "bearer."
"I'd say he's done more than that." -- When asked if first baseman Don Mattingly had exceeded expectations for the current season.
"The other teams could make trouble for us if they win."
"He can run anytime he wants. I'm giving him the red light." -- On the acquisition of fleet-footed Rickey Henderson.
"I never blame myself when I'm not hitting. I just blame the bat, and if it keeps up, I change bats. After all, if I know it isn't my fault that I'm not hitting, how can I get mad at myself?"
"It ain't the heat; it's the humility."
"The towels were so thick there I could hardly close my suitcase."
"You should always go to other people's funerals; otherwise, they won't come to yours."
"I didn't really say everything I said."
No comments:

All hail the Queen of Commas!

Yes, the 75th anniversary New Yorker contains the memoirs of Mary Norris, who descended from the frozen North (and her job on a Vermont cheese farm) to the Vatican of word usage, where, over the course of decades, she earned her place among the great grammarians of the ages. Her defense of the serial (Oxford) comma is, of course, exhaustive and eloquent.   If you have enough "free views" on The New Yorker site, you can click on this link and enjoy.

Link your subscription
Already have a login? Sign in
5 comments:

When to capitalize family titles

When referring to family titles in your writing, should you capitalize or use lowercase?

For example, is it “father” or “Father,” “dad” or “Dad,” “mother” or “Mother”?
If these terms stand alone and are being used as the name you use for the person, they are capitalized.
Example: “Have you decided yet, Mother, whether you and Dad will be able to take your trip?”
If you are merely referring to the person, use lowercase.
Example: “My mother and father are planning to a trip to the beach.”
If “uncle” or a similar family relationship term is used with the name, it is capitalized. Example: “They said Uncle Bill might go with them.”
Otherwise, it would be “my uncle.”
Don K. Ferguson, retired U.S. District Court chief deputy clerk, is a former member of the Knoxville City Council. He may be emailed here.